3 mins &nbsp18.04.2016 Victoria Allen, John Ellias, Louella Stone
As European banks continue to pull back their global operations Chinese banks, eyeing higher yields, are looking to establish a more dominant presence in the institutional banking market in Australia. These changing dynamics will lead to a significant change in the shape of the market and more M&A activity in 2016/17. 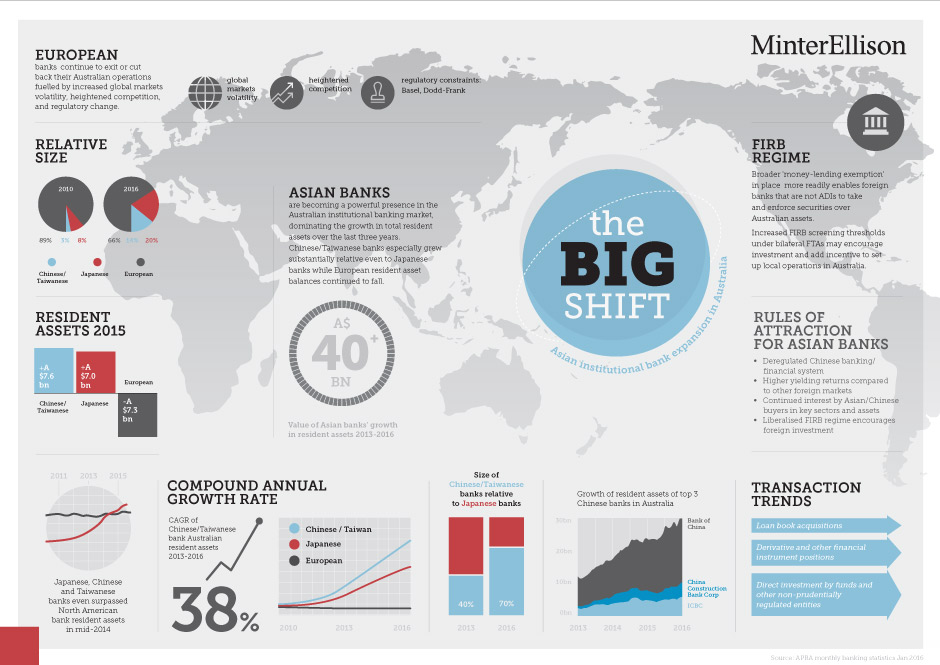 Since 2010, a number of prominent European banks have exited the Australian market, including Lloyds, RBS and Societe Generale. Some European banks, such as Barclays, are in the process of winding up Australian operations. In the case of Barclays, changes in global conditions coupled with the rising cost of capital in Australia impacted their fortunes adversely.

However the pattern of exits are being offset by additional inbound investment from Asian banks – mainly Chinese and Taiwanese banks that have entered the market since 2010 and established a substantial beach head.

Australia is an increasingly attractive destination for Asian banks, driven not only by the deregulated Chinese banking / financial system but also the higher yielding returns Chinese banks can achieve here compared to other foreign jurisdictions, and the continued Asian - especially Chinese - interest in Australian assets in key sectors.

We have observed steady growth in resident asset balances in Australia by Chinese, Taiwanese and Japanese banks. This growth has been driven by low domestic foreign rates of return, continued Australian business growth fuelling demand for lending, and the expanding presence of Asian businesses in Australia. During 2015, for example, Japanese and Chinese/Taiwanese banks respectively added an additional A$7.0bn and A$7.6bn of resident assets, while North American bank resident assets grew by only A$3.1bn, and European banks actually fell by A$7.3bn. The top three Chinese banks (by resident assets) in the country - Bank of China, ICBC and China Construction Bank - each grew respectively by 25%, 20% and 51% in 2015.

What seems clear is that the next phase of institutional banking in this country is going to be dominated by the Chinese banks, with likely transactions to take the form of further loan book acquisitions, and potentially, derivative and other financial instrument positions as well.

While many of the recent financial asset portfolio sales in the Australian market have primarily invovled consumer and corporate receivables, they have often included related derivative arrangements within the sale portfolio. And we are now seeing a trend towards the divestment of stand-alone derivative portfolios as a result of increasing capital charges being required for some derivative positions. This opens up an opportunity for non-prudentially regulated entities – such as managed funds or other non-bank institutions with appropriate expertise and resources – to invest directly in this asset class. China Construction Bank’s recent purchase of Royal Bank of Scotland’s Australian loan book is one example.

Finally, the significant overhaul of the FIRB regime that took effect from 1 December 2015 clearly underscores the message that, from a foreign investment regulatory perspective, Australia is still 'open for business'.

The liberalisation of the FIRB environment for certain investors and transactions makes Australia more ‘M&A friendly’ for offshore institutions. Previously, foreign banks that were not authorised deposit-taking institutions sometimes required FIRB clearance to take and/or enforce securities over Australian assets. This is no longer always the case, with a broader 'money-lending exemption' in place. While some FIRB clearance requirements remain for foreign financiers establishing a new business in Australia, the foreign investment rules have not been an impediment to banks setting up in Australia historically, and it is unlikely that these remaining FIRB requirements would be a deterrent to potential new entrants.

In addition, private foreign investors from China, Japan and Korea now have the benefit of higher FIRB screening thresholds under relevant bilateral free trade agreements with Australia, which may also encourage higher levels of investment from those countries into Australia and add further incentive for their home country banks to set up in Australia to service them locally.

Playing our part in creating a safe workplace and communities.